When SaulPaul played the BET Music Matters Showcase in Los Angeles, BET’s Kelly G said, He was a star. In New Orleans when Martin Atkins, author of Tour: Smart, spotted SaulPaul in attendance at his keynote, he stopped midsentence and exclaimed that SaulPaul was a genius. He had experienced SaulPaul’s Cutting Edge Music Festival showcase hours earlier. When Third Coast Legend DJ Michael 5ooo Watts witnessed SaulPaul freestyle, he came up to him after a show and asked SaulPaul if he could take a picture with Him! 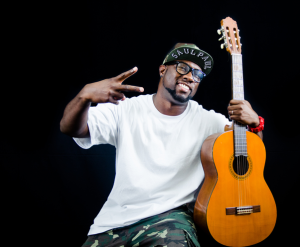 Regardless where I go, results never vary,
I’m pretty much a beast, yeah it’s seems I’m something scary…
-The Anthem, SaulPaul

If SaulPaul is a beast, the Krakken has been released. A major touring act, SaulPaul just finished up a spring/summer tour that included a show in New York City for the NFL and a performance at The Kennedy Center in Washington D.C. In July, SaulPaul took time off the road to polish new material at a weekly residency at The Parish Underground on the famed 6th St. in Austin, TX. In addition to being featured in the flagship newspaper of the city, The Austin American Statesman, SaulPaul was selected as the Austin Music Foundation August Artist of the Month. To top it off, SaulPaul was selected as an Ambassador for the City of Austin and sent to Chicago to rep the city at the Navy Pier in The Windy City!

SaulPaul had a dream. It was to make music, make a living and make history. Currently, he’s living that dream! He’s dreaming in 3D. And that’s the name of his new project, Dream in 3D.

The new album picks up where his last project, Tower to Tower, left off. Whereas Tower to Tower told the story of a young SaulPaul rising above his circumstances and succeeding in life, Dream in 3D tells the story of SaulPaul, as narrated in the song #ShineRightNow, “not just getting by but getting it in” and living his dream. In all essence, it’s the sequel. So much so, the official title is Tower to Tower 2: Dream in 3D.

Like the previously referenced lyrics, SaulPaul’s songs are based on his life experiences. He’s lead a colorful life. If you haven’t seen the autobiographical film Tower to Tower, you should. It tells his story of going from prison incarceration to college graduation. That’s how he went from Tower To Tower. From the prison watch guard tower to graduation from the prestigious University of Texas at Austin at the famous UT clock tower. From four felonies to a 4.0 GPA.

The lead single from the upcoming project is titled RISE. The song was written in the Live Music Capitol of the World, Austin, TX, but it was recorded in Nashville with the help of Grammy Winning, Platinum Selling Producer Billy Smiley. The song itself features SaulPaul rapping, singing, beat boxing and playing percussion on the guitar. Totally organic, totally from the soul. It serves a great snapshot of where SaulPaul has evolved to as an artist.

More than excited about how it turned out, SaulPaul returned to Austin to work with music video director on the rise, John Addabo. They were able to shoot a music video that caught the energy and emotion of the song. RISE is already being added on mixtapes and radio stations across the country.